It’s April Fools Day and that means our team just spent a massive amount of time on an elaborate holiday spectacle. This year, we came back with our third Rivals Direct. But because we constantly have to keep one-upping the previous year, we couldn’t just simply do another plain, boring direct. We had to push ourselves to the limit.

And that’s how Twitch Plays Rivals Direct was born. The fans who joined in the Twitch Stream were able to influence the direct itself and even play both Rivals and Creatures through voting in chat. 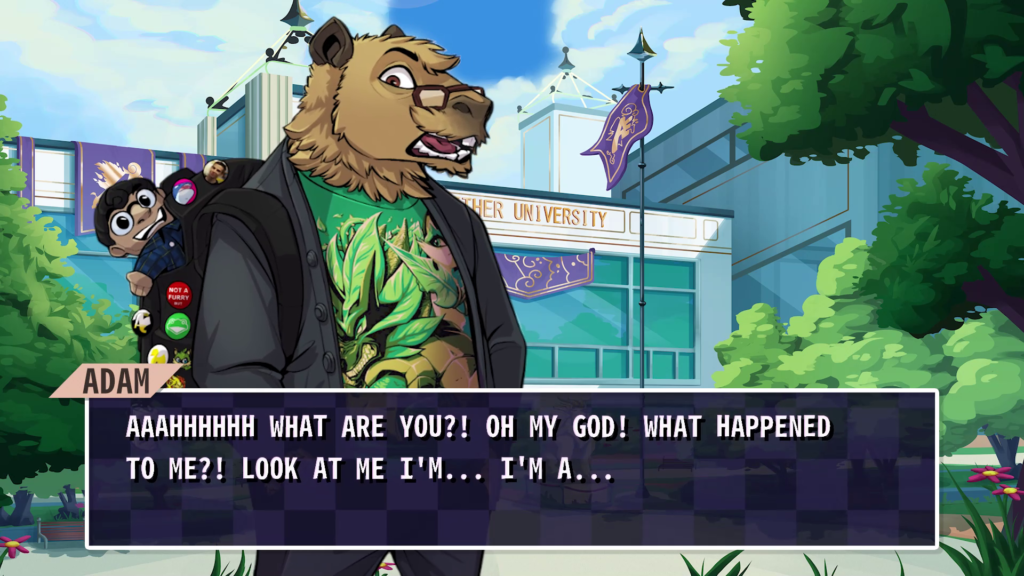 We also returned to the world of Lovers of Aether but two years have passed since our last visit so instead of Aether High, we stop at Aether University. Adam Carra was the host again but this time as Adam Capybara as he found himself inside the Lovers world. Viewers helped Adam make dialog decisions, complete minigames, and navigate Aether University as he tried to uncover content trailers from the game’s characters. Inputs from Twitch chat controlled the experience to create an out-of-the-ordinary direct that was loaded with Aether reveals.

The first reveal was a new trailer for Tales of Aether, a comic series set in the Aether universe. As many fans were expected, we’re confirming that the first comic series will follow the story of Clairen, the Flame’s Salvation. The comic will be released later in 2021 and you’ll have to wait just a little longer to find out how to get your hands on it.

Since we launched Steam Workshop support for Rivals of Aether in 2019, we have been amazed at the sheer amount of creative and wild characters that creators have posted to our workshop. There have been over 1600 characters posted and we set our eyes on four of the best original creations to bring into the Rivals of Aether universe. These four characters will officially be joining the roster in an update later this year – both on Steam and on Nintendo Switch!

Your favorite Youtuber Adam Carra is back and he’s about to outdo even himself. Adam is working on a new documentary focused on the development of Rivals of Aether and its competitive scene. You’ll get to see how the journey started along with some fantastic interviews with players, developers, organizers, and other community members. The documentary is sure to get you hyped as local competition eventually returns!

Creatures of Aether has made a ton of progress on iOS and Android since its launch in September 2020. We have increased the Rivals from 5 to 11 adding a new one each month. The newest Rival, Fleet, is a protagonist from our upcoming title Dungeons of Aether. We also announced today that Creatures of Aether is coming to Steam this summer so you can play it with your favorite mouse and keyboard. We are hoping to get more players into the game with the Steam release. Join the Official Discord today if you are interested in Creatures of Aether.

For those of you who have been following Rivals development, you know that Rollback has been a long time coming. Thanks to the work of YellowAfterlife and Zach Reedy, we have finally gotten to the point where the game state is saving and loading in a reasonable time. We’re hunting down desyncs and feel confident that we can get players into a 1v1 Open Beta on Steam sometime this Summer™. Follow Rivals of Aether on Twitter for updates on how the rollback netcode is progressing.

We announced today the genre of our upcoming game Dungeons of Aether – it’s a turn-based roguelite. We have an amazing team working on this pixel-perfect adventure in Aether and we can’t wait for you to get your hands on it in 2022. We also revealed another protagonist today named Artemis. She’s an elite warrior who is part of the Fire Mora and is sent on a secret mission by Loxodont that lands her in Julesvale. We have two protagonists left to reveal before the game launches so stay tuned!

The Direct ended with Adam finally getting his hands on the 3D folder revealing a new project that our team is working on. We have graduated past the humble Dan Fornace LLC and a new team is building the next big adventure in Aether. We don’t have a ton more news to share on this project just yet but enjoy the teaser and follow Aether Studios on Twitter to get more updates.

And that was everything. It was an amazing experience being able to play with fans and reveal all this content. All I know is that next year, April Fools Day needs to be canceled.