The time has come! Last April, the Rivals of Aether team announced the inclusion of four community-created characters into the base cast of our original platform fighter. After an intense year of development we’re proud to finally bring these characters to life in our free update today on PC and Nintendo Switch.

The workshop character pack is filled to the brim with new content. Each of our four new characters come with their own stages, music, and Abyss Runes right out of the gate. Players familiar with their Steam Workshop versions will find updated kits, animations, sound effects, and much more.

Players who already own Rivals of Aether on Steam or Switch will automatically receive the update for free. 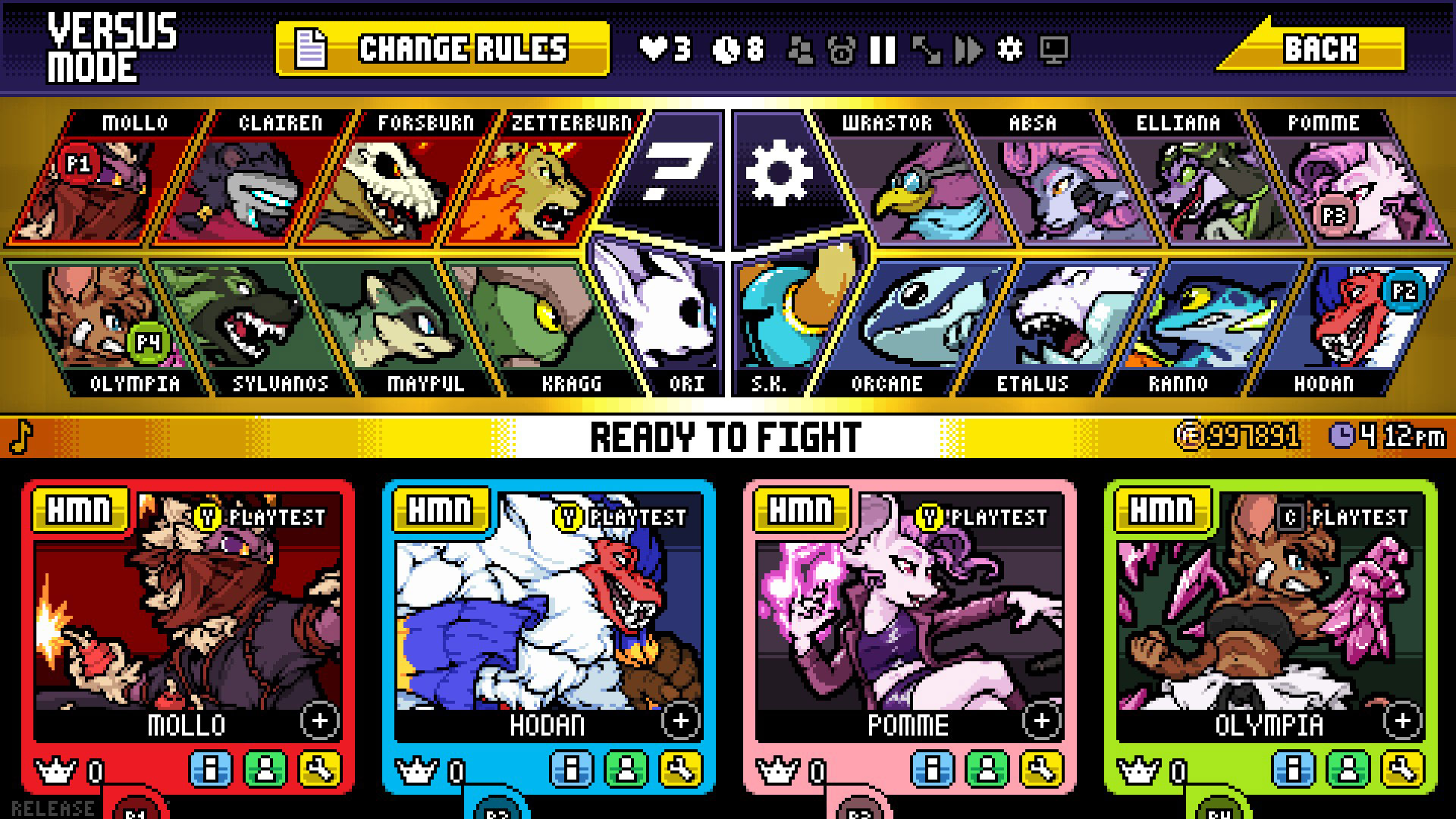 The Smoldering Rage from the future is here! Mollo is taking a break from the rebellion against the treacherous Loxodont to utilize his explosive arsenal of weapons in an all new battlefield. Item management and stage control are key to mastering this moth, as he can do serious damage from a distance, or up close and personal.

The Hot Springs Sage cannonballs into Rivals of Aether! Hodan uses his expert technical abilities to empower himself when the time is right. Build charge by holding a downward directional input, then unleash the beast with powerful secondary versions of key moves.

The Superstar Songstress has arrived on the scene and is ready to put on a show! Pomme’s unique understanding of sound waves allows her to quite literally float through the air, making her a potent threat in even the hardest to reach corners of the battlefield.

The Amethyst Fist puts her deep understanding of martial arts to the test as she brawls her way through Aether! Olympia is a fundamental warrior with a clear game-plan of hitting her opponents hard and making each hit count. Stand your ground and strike fear into your opponents, because this one is going to hurt. 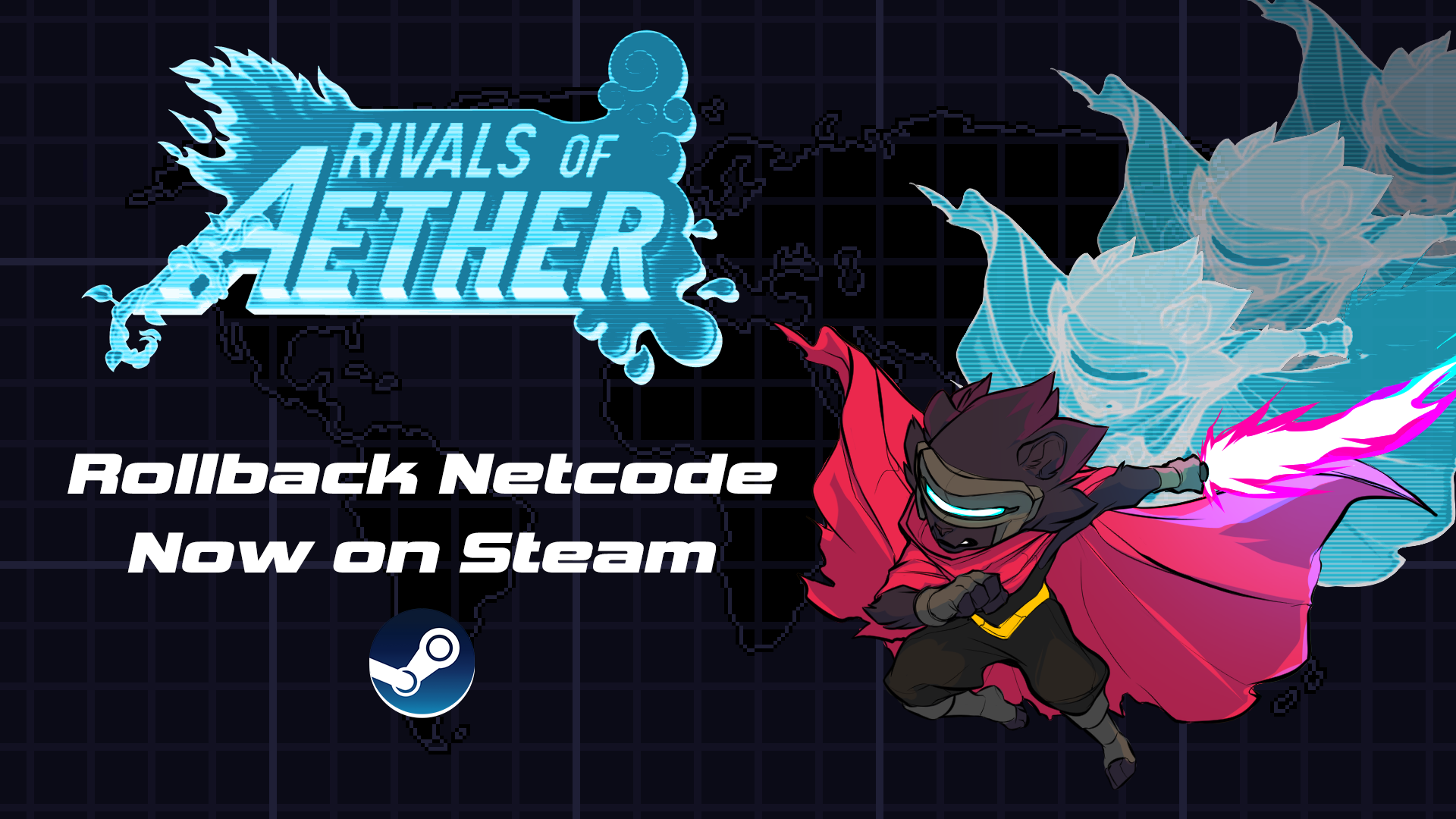 Finally for those playing on Steam, we are excited to announce that Rollback Netcode is leaving our open beta branch to officially become part of the base game. Experience the Workshop Character Pack in all its glory with the launch of the long awaited rollback netcode update on PC.

We hope you check out the newest additions to Rivals of Aether this Thursday on Switch and Steam. Thank you to our wonderful community for being with us on this journey. These new characters would not have been possible without the fantastic Workshop community that has blossomed over the years. We hope everyone will have as much fun with them as we have.

Will there be future dlc skins for these characters?

We’ll likely have some promo skins for them either related to tournaments or something else.

Awesome! Long time coming, you love to see it finally come to fruition! 🙂

I think Mollo he might be the character that I like 👍🏾 & I believe he will be my new “Favorite Main” for sure to see online He’s a cooler & interesting RoA Fighter I like how he has the Firecracker, Cherry 🍒 Bomb, Baseball Bat Bomb, & best of all his Finisher Bomb it has that explosion style in it & he does the a Peace sign that’s awesome 💣 so I’m ready excited about this Rivals Character he’s a Bomb User he could our first explosion 💥 fighter in the game & Rivals is a good indie fighting game I know that he’s Moth which sounds but yeah I’m all for win on using Mollo.

I was really hyped for these characters to come, and they’re all extremely fun to play with!

This is awesome! I’m confused as to what the rollback net code is though. Can someone explain?

The short version is that rollback netcode is a better system than our previous delay-based netcode for the realities that games face when played on a range of computers from low-high quality and similar for internet connections. This article is super in-depth and can tell you more: https://arstechnica.com/gaming/2019/10/explaining-how-fighting-games-use-delay-based-and-rollback-netcode/

There are plans for crossplay with rollback between Switch and PC ?

Rivals connects for matches with a peer to peer connection (meaning there’s no servers or anything running the show) so we don’t have crossplay planned or a way to do it currently.

Is there a possibility that consoles like Xbox can get some love too?

Once we get everything smoothed over from any launch hiccups we’ll be looking at Xbox and other ports again. Our small team for Rivals was focused on this update all last year but now that it’s done we’ll have some additional dev time.

Will these also be on console?

Yep these are already on Switch!

Makes me wonder if we may see some of Sai’s characters in one day. But uh, dang, Olympia feels way faster as a base cast.

Will there also be Rollback on the Switch version?

Does the rollback net code support all of matchmaking or just 1v1s?

Just 1v1 modes (+spectator) currently. We are working to bring it to FFA and doubles.

But no rollback for the switch. 😭😭😭

I love Olympia so much 🙂