Today we’re bringing something new to Creatures of Aether with our biggest addition since launch.

Introducing Dungeoneers – an exciting new single player mode for Creatures of Aether! Dungeoneers puts a twist on typical CoA gameplay with each run offering offering new ways to play as you build decks and harness abilities with power levels off the charts compared to standard play. In Dungeoneers you’ll choose a trusty Rival and a Rune, visit the mart to adopt creatures, and battle and upgrade your way through the dungeon to the finish!

This new mode is completely free to play, and doesn’t rely on cards in your collection. Decks for each run are instead built as you play, and each run starts from scratch. You’ll even earn Aether Coins and cards for your collection depending on how well you do.

So are you ready to go on your first Dungeoneers run? We’ve put together a short starting guide to help you prepare. To get started in the new mode, head right to the Dungeons area from the main menu. We’ll explain each of the main parts of a Dungeoneers run below: 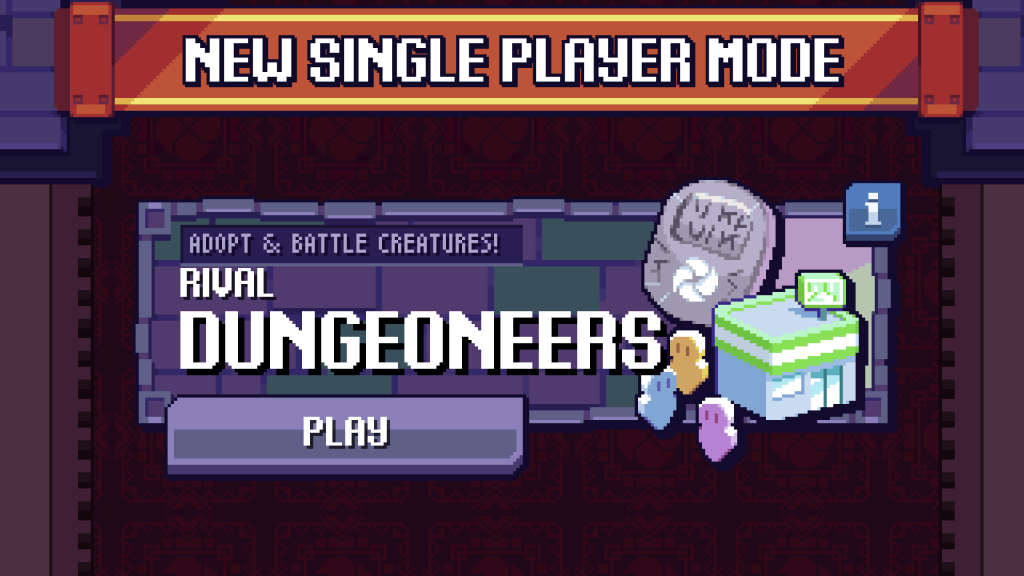 1. Choose a Rival to lead your deck

To kick off your dungeon run, first choose a Rival that will lead your Dungeoneer deck. Each Rival comes with a powerful rune that changes an aspect of the game.  Some are straightforward while others are a little more complicated, but either way they’ll give you a good idea for how you might want to build your deck to take maximum advantage of your Rune’s and Rival’s abilities. 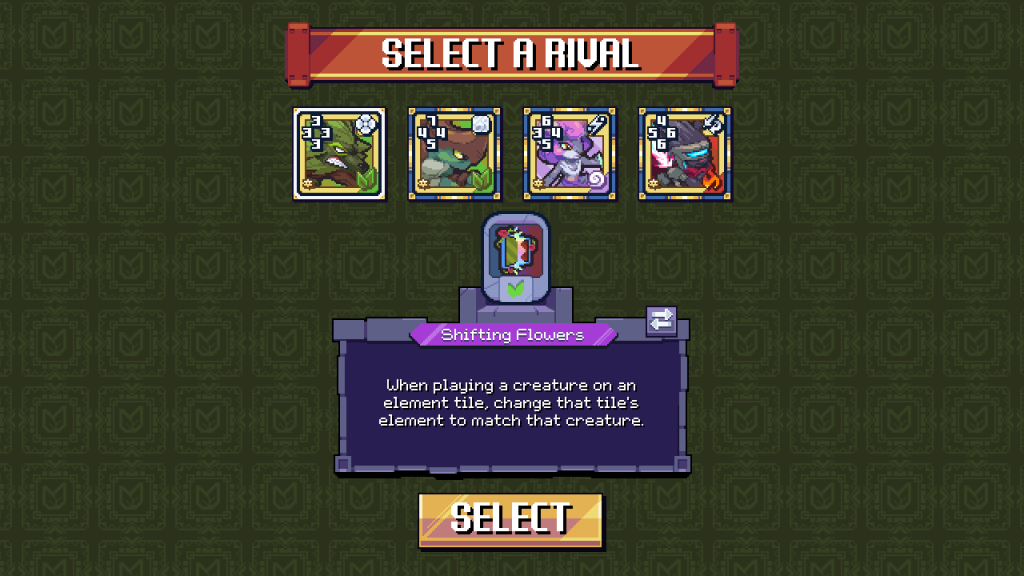 After you choose your Rival and Rune the next place you’ll head is the Creature Mart. When you first get there you’ll notice your deck at the bottom of the screen is empty except for your trusty chosen Rival. You won’t stand much of a chance in a battle with just one card! Luckily at the Creature Mart you can adopt creatures for your deck. You’ll enter the run with 6 tickets, and creature cards in the Mart always cost 3 tickets each. Drag a creature you like from the mart to your deck to start building. You’ll earn more tickets when you enter the shop each round, plus bonus tickets for each point you have at the end of a battle. 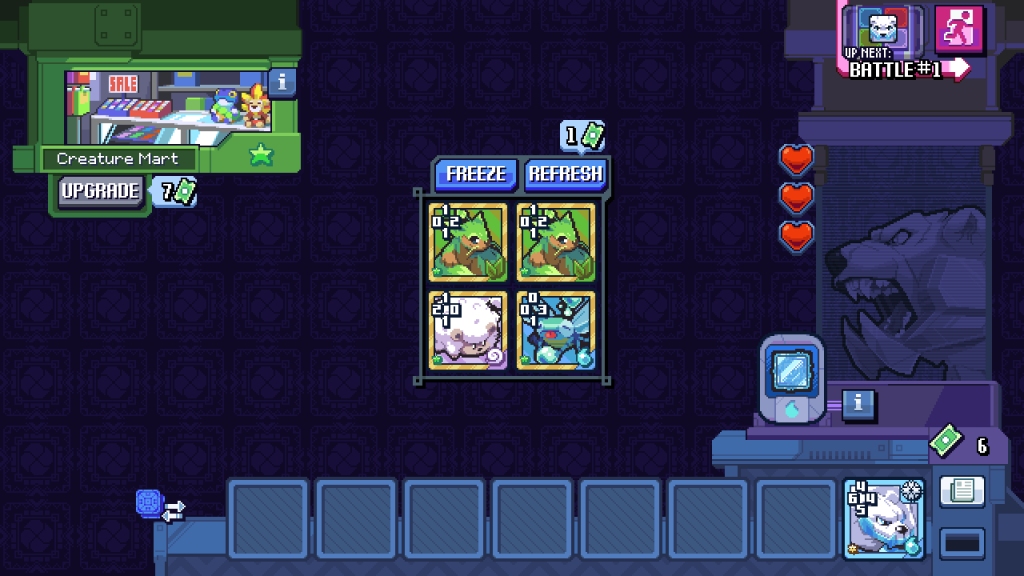 A level one Creature Mart.

The mart is displayed as a game board where creatures from your current shop tier are randomly presented. If you’re not a fan of the creatures shown (either they don’t fit your deck or you want to try your luck at getting some better offerings), you can refresh the Creature Mart for 1 ticket to get some new options to adopt.

The shop also refreshes automatically every time you come back to it after a battle and after upgrading its tier (which gives you access to more powerful creatures). You can also freeze the shop if you see a creature you like but can’t afford so that you can buy it when you come back from your battle. 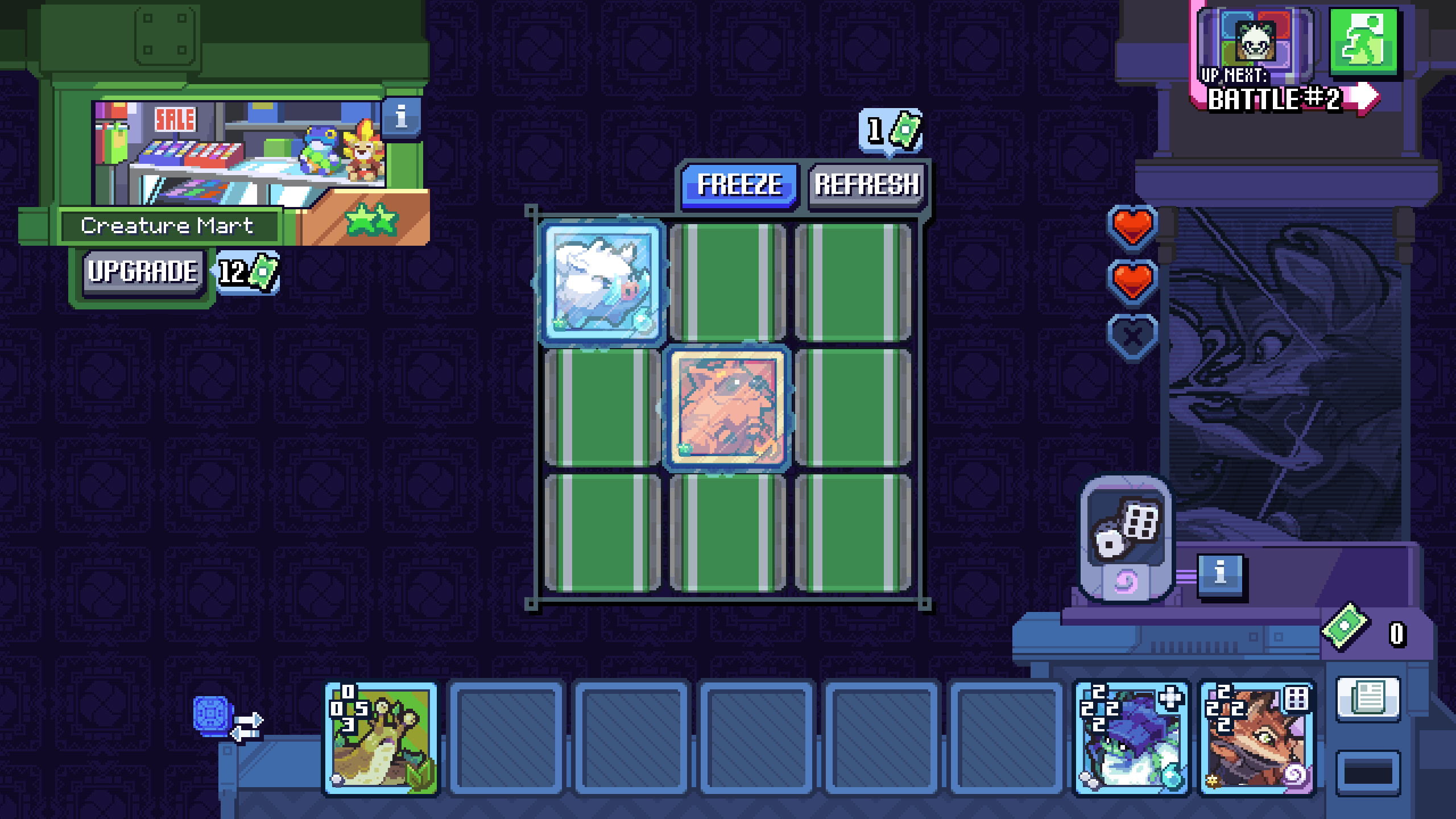 We froze this level two shop because we just had to have the Tinderbit.

Even though your creatures start small, don’t count out your little ones at the start! Buffs at the mart are permanent for the entire run. Grow your creatures to keep up with your opponents by adopting duplicates to level them up. Each copy after the first that you buy will automatically combine and increase its level and stats.

When a creature reaches level 4 it hits the max level. Level 4 creatures are more powerful, and ones with abilities will even get an upgrade. If a duplicated creature would go past level 4, it instead adds up to 3 new creatures to the mart at your mart tier +1. Leveling not only makes your own creatures more powerful, but also gives you more options for your deck.

Managing your tickets wisely for buying, selling, and upgrading in the mart is key to a making it through the entire run! 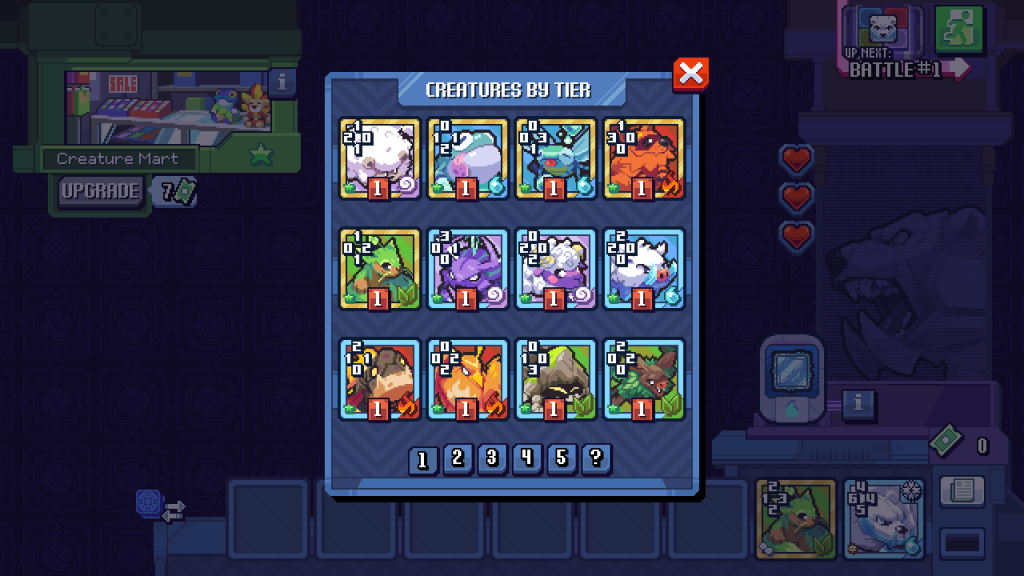 Cards with gold borders in the Mart have shop powers unique to Dungeoneers. Make sure to hover over them to see what they do.

A few times during your run you’ll be taken to The Forge. Here you can either acquire another powerful rune for your deck, or enhance one of your cards that has an ability to instantly unlock the powerful maxed level version of its ability. You can only choose one action at the forge, so think carefully! Try to use the forge to enable synergies with your deck through powerful runes or key abilities. 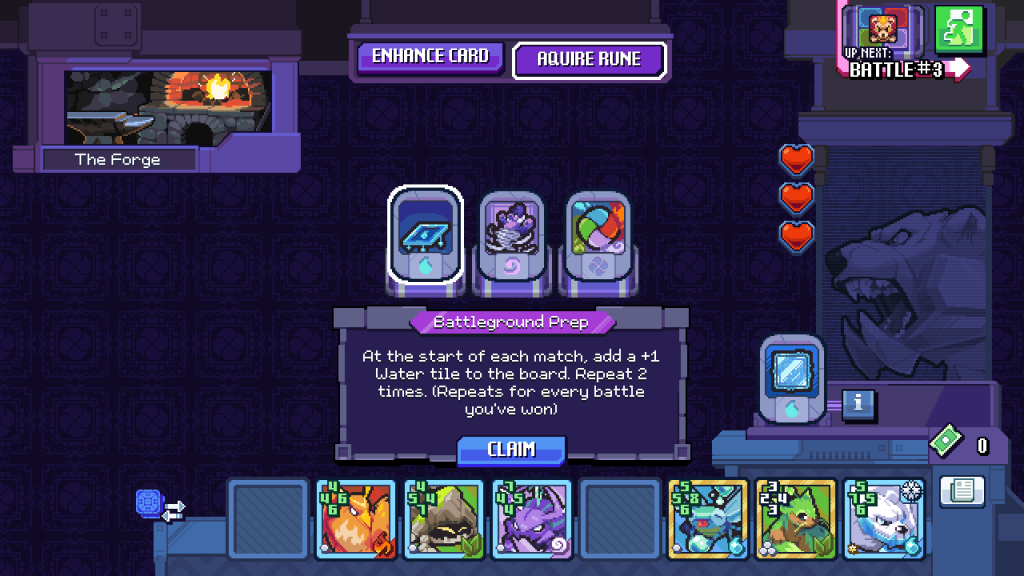 Picking just one thing at the forge is tough.

All this adopting and upgrading leads to one thing – making the most powerful deck for battles! Battles in Dungeoneers follow the rules of normal gameplay with all of the extra runes and stats on top. When you’re in the Creature Mart you can view your next opponent by tapping or clicking on their portrait in the top right, or the news icon in the bottom right. This shows the level of their shop and what actions they took this round.

Opponents are always AI controlled, but you might notice that they have names like players, and maybe even some names you recognize. That’s because the decks the computer uses are built by fellow dungeon crawlers during their own Dungeoneer runs. Watch out as some might be particularly powerful and creative. 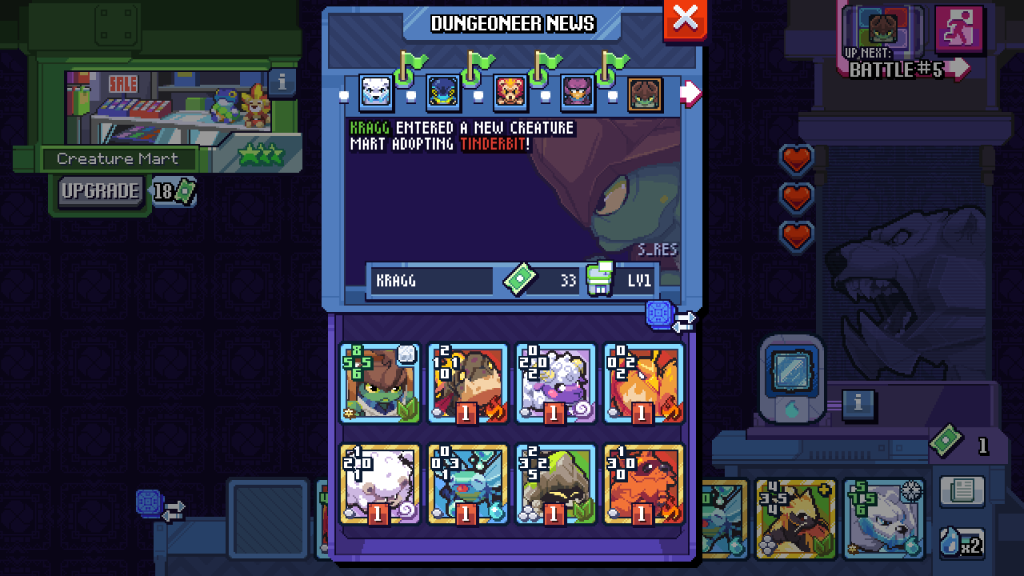 Creatures of Aether is free to play on iOS, Android, and Steam so give it a try today. There’s plenty of information in-game for Dungeoneers (just tap or click on any of the ‘i’ or ‘?’ information boxes) and it’s even got a handy tutorial the first time you enter. Visit the Creatures of Aether discord to get strategies and talk to other players about Dungeoneers. We hope you enjoy the new mode!

P.S. You can get some VERY powerful decks in Dungeoneers. We’d love to see your best runs on social. You can tag us at @AetherCreatures.

I’m encountering a bug where the game freezes after the first battle in this mode. Other modes work fine. Pixel 3

This mode is my favorite thing to do, I really like it. It’s a whole game by itself

I am running into two particularly annoying bugs when playing this mode.

One bug happens after a match. The game crashes when you lose, or sometimes when you win, a match. Then you either get the results or you start the match over from the enemy’s first move. This is a problem.

The second problem is that some players have creatures with turning power in the 30s, 40s, and 50s range. I don’t know if there’s some way to get that far in this mode or if they’re hacking to get this, but otherwise there is a serious problem not being addressed. I know there’s a warning of powerful cards, but it makes the match unwinable with numbers that high.

These fixes need to be addressed.