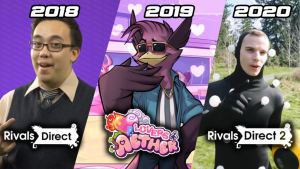 Seattle, March 22nd, 2021 – Creators of Rivals of Aether will be hosting their annual company direct on April 1st, but unlike previous years, this time they are asking viewers to participate on Twitch. Much like other Twitch chat interactions, viewers will be able to vote on choices and direction the direct takes as well as play games collectively when revealing the new content coming this year.

“April 1st has somehow become the Rivals of Aether update day. What started as joke blog posts a few years ago grew into our first Rivals Direct in 2018, then the release of an entirely free dating sim game called Lovers of Aether in 2019, then Rivals Direct 2 in 2020. Now we’re back for 2021 and we have to go even bigger and even better because I don’t value my sanity.”

What is Rivals of Aether?

Rivals of Aether is a pixel art 2D platform fighter released in 2017 made by indie developer Dan Fornace and team. For more details visit, https://rivalsofaether.com/

What will be announced?

Fans can expect content updates for current titles, announcements of new games, and surprises much like the company’s previous direct videos.

Creators of Rivals of Aether announce Aether Studios as they begin a new 3D project in Unreal Engine 4   The sequel to Rivals of ..

Creators of the indie hit, Rivals of Aether, take the leap to developer status in the announcement of game’s sequel   Aether ..